Blue Meanie Mushroom The most Potent Of All Psilocybin Mushrooms

This Blue meanie Mushroom are one of the strongest psilocybin containing mushrooms. They have an unassuming stature and they produce small medium-sized brown to white mushrooms.

Mushrooms from the genus paneolis are super common, they grow globally in tropical and temperate environments. Panaeolus cyanescens is a tropical and subtropical grassland species which is often found in dung . If you’re not aware of blue meanie mushroom  you could easily miss a patch of them while foraging. For the more popular philosophy cubensis cause you’re probably looking for psilocybin-containing mushrooms and as mentioned these are strong ones. Blue meanie mushroom are believed to contain two to three times the psilocybin found in cubensis.

In the field blue meanies tend to be light gray or off-white at maturity. When they’re young the caps are light brown and then fade to off-white or light gray. Occasionally they have yellowish or brownish tones, the caps are approximately 0.5 to 2 centimeters in diameter at first. They’re hemispheric and they expand to bell-shaped or convex, the cat margin is curved.

When young the caps are slightly hygrophilous which means that they lose their color as they dry out and they often develop cracks in dry weather. The stem or stipe tends to be seven(7) to twelve(12) centimeters long and two to three millimeters thick and the width is equal along the length and slightly enlarged at the base. The stem is colored like the cap and covered in a fine white powder. These mushrooms have a flower-like smell and taste . like all other psilocybin-containing fungi when they’re damaged the mushrooms bruise greenish or blue. This can often be seen on the cap or the stem with  bloominess.

Panaeolus cyanescens is a tropical and subtropical species so in tropical regions the mushrooms grow year round. In the subtropics they grow  from late spring to autumn depending on the rain and humidity. They’re known to occur in temperate zones during wet and humid parts of the summer. Blue meanies are mostly found growing on cattle or horse dung in pastures and fields. They grow singly and they also grow in groups, they appear in spring or during rainy seasons. Their range in the united states is from florida along the Gulf Coast where it fruits virtually around unquote cow pies.

Bloomings were actually thought to have been introduced to other countries by the movement of livestock. So it’s assumed that Panaeolus cyanescens was introduced to the islands of hawaii during the early 1800s. When cattle were imported there from the Philippines and now they occur throughout the tropical and subtropical regions of the northern and southern hemispheres. In addition blue meanies are commonly found in Mexico, South America, Colombia, Bolivia, Brazil, Peru, Eastern Australia. India Bali, Southeast Asia, South Africa, france and italy so blue meanies grows in much of the world. 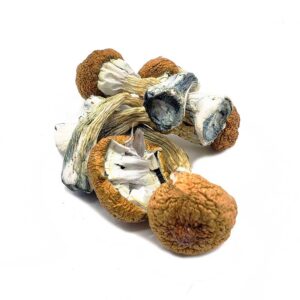 Panaeolus cyanescens comes from the genus panaeolus, mushrooms belonging to this widespread genus are generally small and have black spores. They often grow on dung but not all panaeolus contain psilocybin.  The panaeolus genus contains 13 species that produce psilocybin including panaeolus cyanescens blue meanies. Panaeolus Cinctulus mushrooms are called modal gills due to the irregular spots or patches of color on their gills.

This species panaeolus cyanescens is a mushroom with many names, knowing what to call them can be very confusing. The name panaeolus in Greek means all variegated it’s describing the mushroom’s spotted texture. The species name Cyanescens is derived from Cyaneus meaning blue, for the color the flesh becomes when bruising. Rumor has it that the common name blue meanies actually came from the Beatles psychedelic film yellow submarine . According to some other mycologists the common name was coined in Australia .Apart from gold tops blue meanies is one of the more commonly used descriptions of psilocybin-containing mushrooms.

To make this all more confusing, there’s a strain of psilocybin cubensis a different species of psychedelic mushrooms also called blue meanies. There are others with similar names, same abbreviations and many other things. Two species of mushrooms are abbreviated the same way, but they are very different. The first one is a dung lover and the other one is a wood lover.

They also have comparable levels of psilocybin which is the compound people typically attribute to what makes you trip. Finally, this mushroom is called pancion after its new latin name. So all of this began early on for this mushroom all the confusion pantolysis cyanescence or blue meanies. Were first described in Sri Lanka as agaricus cyanescence in 1871.

A few years later it was described by another mycology expert from the philippines who named it copelandia papillonacia. It was then named copalandia cyanescence by another mycologist in 1951. The species was named paniolescence cyanescence what we’re referring to it as in 1887 which is now its official formal name. The genus copelandia was deprecated meaning that it’s no longer valid. Panaeolus cyanescens is thought to have originated in Asia and the mushroom belongs to the family copra nasier .The same family is the common mushroom copronus comatis which you might know by the common name lawyer’s wig.

Potency of blue meanies as mentioned earlier, they’re known to be pretty strong. The inventor of lsd  chemist Albert Hoffman, analyzed blue meanies then known as copelandia  cyanescence in the early 1960s. After reports of intoxications caused by dung-loving fungi from Southern  France. Hoffman found psilocin in higher concentrations after analyzing the fruiting bodies. There were only slight quantities of psilocybin although the origins of these samples were mysterious to Albert Hoffman. Their true origins eventually came to light, they were growing from the dung of horses bought from indonesia to take part in a horse race.

This species is quite potent, the effects of blue meaning mushrooms may come on quickly due to their higher levels of psilocin than psilocybin. Blue meanies are often reported to be two to three times the strength of silas cubensus. Yet there’s very little published data to support these claims. Arrowwood reports that these mushrooms have a combined psilocybin and psilocin content of between 0.5 to 2.95% dry weight. In 1992 there was a mycology expert who said that their potency was variable from 0.17 to 0.95% psilocin and 0.16 to 0.19%. Psilocybin philosophy cubensis by comparison has been reported to have concentrations of psilocin and psilocybin between 0.14 to 0.42 % and 0.37 to 1.3% dry weight respectively.

It’s essential to know lookalike species especially because sometimes they can be fatal. A lookalike species is a mushroom species that may be confused with your target species. There are a lot of species that are look-alike species with blue meanies and we won’t get into all of them now. A simple way to tell this species apart from others while not definitive is the bluing reaction of the psilocybin. Panaeolus cyanescens also have dark purple to black spores.

Something else to look out for when you’re foraging for blue meanies is where the mushrooms that you found are growing. As mentioned before blue meanies grow on dung typically on horse manure, cow patties. So if you’re finding a mushroom that looks like a blue meanie but it’s growing on wood chips for example it’s not a blue beanie. Additionally something to look out for is knowing where this mushrooms can grow, the time of the year or season they grow these are all just kind of basic foraging 101.

Check out our website for your top quality psychedelic products and a one-on-one chat with seasoned professionals. We also have shamans who offer special sessions for clients in need on a discreet ceremonies. Hope you enjoyed the read and please feel free to drop your comments for it helps us get better. Lets come together to help the our psychedelic community grow and take its place amongst the stars. In whatever way you can help this community grow is a step in the right direction. Thank you very much